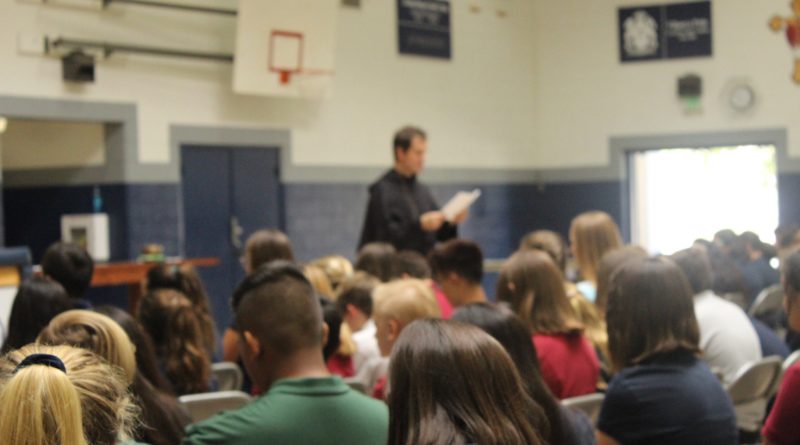 Students ages eleven to fourteen flooded the gym on October 1, 2018 for Villanova’s annual middle school retreat entitled “Our Journey With God”. The retreat revolved around the role faith played in students’ impending transition from middle school to high school. The retreat was not only an exploration of faith, but also served to give students a small preview of what it would be like entering an environment with new people as they would when leaving middle school. As a high school Junior, I found myself at the retreat as a leader of one of these small groups. However, when surrounded by strangers who I would soon be assigned to have to interact with for the rest of the day, I was undoubtedly nervous. I attempted to begin the day with a positive attitude, but, suddenly coming to grips with how many new people I would have to meet, I began to feel as though I had no idea what I had gotten myself into.

Yet, despite my anxieties, my small group pleasantly surprised me. The middle schoolers consistently impressed me with their kindness and active participation in group discussions and activities. They weren’t the terrifying, apathetic people my panicked mind had made them out to be. In fact, they made my day worthwhile.

Satisfied with my day, I couldn’t help but draw parallels between the experience of my group and that of my own middle school retreat. I remember my own middle school retreat very clearly:; I remember entering the Villanova gym, terrified of being separated from my friends and being put into groups with strangers. I remembered doing ice breakers, having small group discussions, and listening to the impressive talks of two Villanova students. As I went through the motions of being a retreat leader throughout the day, I continued to pick up on the similarities between the experience of my eighth grade retreat at Villanova and that of the middle schoolers in my group.

Despite so many similarities, there was one obvious difference: I was no longer a participant in the retreat, but a leader. As a middle schooler, I would have thought of this as impossible. Leaving middle school was quite a big deal to me, and having been with the same group of thirty people for six years, I thought adapting to a new environment would be impossible. I liked to think of my transition to high school as a completely terrifying experience, believing that once I left middle school everything would change.

As I looked to the middle schoolers, seeing myself in them, I realized how long it had been since I was in their shoes. It was a bittersweet feeling. No longer a middle schooler and now a retreat leader, I wanted to tell myself all those years ago how things had somehow worked out.